Sei is a character in Escaped Chasm. Little about her is known besides her name, however, she appears to cause harm to Lonely Girl.

Sei has a similar palette of warm colors to Zera, though her reds are deeper and more prominent. She has a pair of large black wings on her back and two black horns on her head. Her spaded red tail is split at the base; this contrasts Yoki, whose tail splits around the middle. Her red hair is tied into a ponytail behind her head, and her eyes glow yellow.

During the Worst End, she appears to grow additional horns, eyes, and tails, and her hair becomes longer. Her arms and fingers also grow and she seems to have reptilian hind legs.

Sei has only a few lines of dialogue during Escaped Chasm, though the time she does speak shows her pleading with Lonely Girl so that she might help her and Yoki. Her relationship with Yoki is unknown, though she seems to be protective of her. Sei will attack Lonely Girl if and only if she acknowledges the Familiar Doll and decides to leave it behind. She will not attack if Lonely Girl doesn't notice the doll, showing that she might not be as aggressive as the Worst End makes her seem.

Sei is first shown in Lonely Girl's dream on Day 2. She asks Lonely Girl to help her and Yoki before reaching out a clawed hand and ending the dream.

The only time Sei is seen in person is during the Worst End. If Lonely Girl refuses the Familiar Doll, then instead of her parents' usual room, Sei will appear in a black room. She will turn slowly towards the camera, then flash the screen red, and show an image on screen for 10 seconds. The player is then returned to the start menu. 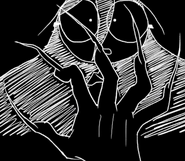 Sei reaching for Lonely Girl
Add a photo to this gallery
Retrieved from "https://escaped-chasm.fandom.com/wiki/Sei?oldid=532"
Community content is available under CC-BY-SA unless otherwise noted.